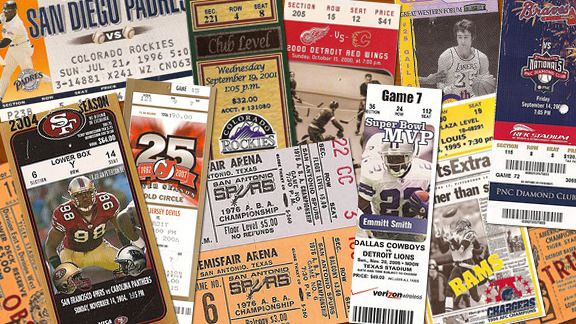 When Russ Havens attends a game, he’s very fussy about his ticket stub. In particular, he prefers that the ticket be torn, not just scanned.

“Tearing it adds to the patina of it,” he says. “It shows use, like a mark on a game-worn jersey.”

That preference is one of many, many opinions Havens has regarding ticket design, ticket use, ticket protocol, ticket history, and just about anything else regarding tickets. All of which explains why Havens, a 44-year-old newspaper marketing specialist from San Diego, recently launched TicketStubCollection.net, a site that encourages people to upload images of their ticket stubs, creating a sort of all-purpose virtual scrapbook of ticket history.

And since stubs are essentially documents of very specific episodes, the site is also a de facto album of people’s lives. Or as Havens puts it, “Everyone loves memories, and stubs are basically time-stamped keepsakes that connect us with those memories.”

True enough. When I look at my own small collection of stubs — mainly from Mets games in the 1970s — a flood of memories comes rushing back at me. Here’s the first game I ever attended, where my father taught me that it was OK to litter my peanut shells on the floor “because you’re allowed to make a mess at the ballpark.” Here’s the time my big brother kept his promise to take me to a game by driving to Shea Stadium through a massive downpour, even though he must have known the game would be rained out (as it eventually was, just as we arrived at our seats). Here’s the time I “treated” my dad to Father’s Day tickets, not realizing that he’d have to drive through holiday traffic, pay for parking, and deal with my endless demands for hot dogs, soda and ice cream, all of which was probably no treat at all. Here’s the time we saw Pete Rose break the National League hitting streak record (which he then extended another six games, but still …). And here’s the season when I sat in almost the exact same seat four different times, because the Mets were so bad back then that it was easy to show up on game day and get a really good seat simply by asking for it at the ticket window. 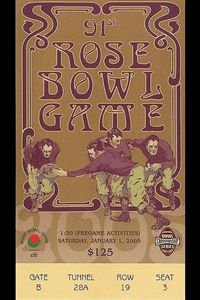 Thomas Neumann/ESPN.comCollege football bowls have long produced some of the best designs in sports tickets. This one is from the 2005 Rose Bowl.

There are other ticket-centric Web sites out there, including one devoted to Super Bowl tickets, another devoted to baseball tickets, and another devoted to high-end super-collectible tickets. But those sites are all run by and for serious collectors. Havens’ new site, which launched in mid-February, appears to be the first one designed to serve as a hub for the EveryFan. The site is still in its infancy but already has more than 1,000 stubs on display — a number that will presumably spike after this article is posted.

Havens has been ticket-obsessed for a while now. Back in the mid-1990s, he published The Turnstile, a zine devoted to stubs. Asked to name his favorite stub, he thinks for a bit before coming up with this one, because it represents a perfect marriage of sports and music: a Beatles concert promoted by A’s owner Charles O. Finley. Cool to see how Charlie O. used the same kelly green for his tickets that he had imposed on the A’s a year earlier.

Personally, I stopped saving my stubs around the time they started looking like generic computer printouts — too boring, not enough pizzazz. And that raises some questions: Was there a golden age of ticket design? Are there certain events that have tended to have really good-looking tickets? Havens gives the nod to midcentury college bowl games, while I’m partial to MLB All-Star Gamesand old title bouts.

Mini-masterpieces of design like those are so much more satisfying than a plain-looking TicketMaster stub, and don’t even get Havens (or me) started on print-at-home PDF tickets. But that’s not to say today’s tickets don’t have anything going for them — modern design software and printing methods allow for all kinds of ticket elements that weren’t possible back in the day, like color photos, holograms and composite background patterns. The catch is that these tricks tend to be used only for season tickets or special events, while the fan who attends a game here, a game there, gets stuck with the vanilla ticket designs.

If you delve into the season-ticket scene, however, there’s some really cool stuff going on. This year’s Cincinnati Reds season tix, for example, feature old Topps baseball cards. And when the Atlanta Falcons wore throwback uniforms for a game last season, they also had throwback tickets, complete with a little history lesson on the team’s uniforms. Other teams actually put their season ticket holders’ names or photos on their tickets. And one of my favorite ticket storylines involves the 1997 St. Louis Blues, who sponsored a coloring contest that allowed a few dozen lucky kids to design the team’s season tix.

“I think stubs arguably look better than ever now,” Havens says. “But it used to take an effort to be good at this kind of stuff — magazine design, page design, ticket design. Now, with design software, almost anyone can be reasonably good at it. I tend to appreciate the effort that was involved when it wasn’t so easy.” 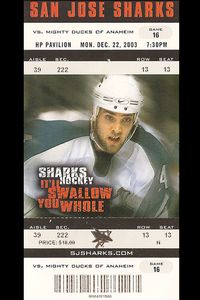 ESPN.comA colorful season ticket is so much cooler than print-at-home PDF tickets. Here’s a San Jose Sharks ticket from 2003.

Whether you’re into the memories, the designs, or both, fans love their stubs. Over on the Uni Watch Blog, I recently asked readers whether they had any prized stubs or good ticket tales they’d be willing to share. The response was overwhelming — a veritable stubvalanche. Here’s a small sampling (with thanks to all who contributed and apologies for those that didn’t make the cut):

• There’s something sort of endearing about a ticket with an ad from a local appliance store rubber-stamped on the back.

• I’m not sure why, but one thing that almost always looks sharp is a ticket design that features a stadium.

• Remember how it used to be a big deal when a team requested and received permission to print playoff tickets? Of course, some of those tickets weren’t needed after all. (And just to twist the knife, that isn’t the only time the Cubs printed World Series tix that never got used.)

• Here’s something pretty cool: tickets from the Colorado Rockies’ first home game, along with the original artwork that was used for the images on the tix. (Click on the thumbnails for larger versions.)

• Can a ticket be too good-looking to use? That was the case for Tom Marquand in 1999, which was Tiger Stadium’s final season. “When I received these for my season-ticket plan that year, they looked so nice that I couldn’t bring myself to rip them out of the ticket book. I just bought more tickets for the games I went to.”

• Marquand also had a great ticket-related story from Super Bowl XL, which was held in Detroit in 2006: “During the lead-up to the game, there was a charity auction of plaster footballs decorated by players and celebrities. I happened to win the one decorated by Steve Sabol of NFL Films, who papier-mâchéd his football with old football ticket stubs.”

• Back around 20 years ago, the South Carolina football program came out with a great ticket series featuring paintings from the school’s Hall of Captains exhibit.

• No surprise to learn that Japanese baseball stubs look like so much other Japanese design: heavy on the cute factor.

• Stubs make great bookmarks, but don’t forget to save them afterward. Reader Tony Orndoff found this groovy Tulane stub inside a used book that he got for free at a Baltimore book depot.

• As you may know, the 1968 Mexico City Olympics featured a really cool design motif, and that definitely extended to the tickets. 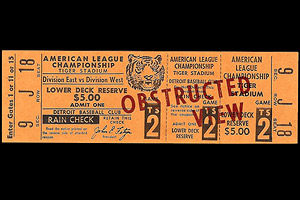 • Christian Eidt’s father collected hundreds of stubs from 1955 through the mid-1980s and saved them in a series of three-ring binders. Among the highlights: a helmet history lesson from the Giants, some amazing World Series tix, and a magnificent Longhorns stub. Also, I didn’t realize tickets used to routinely say, “Hold Your Own Ticket.”

• You may have noticed that one of the tickets in that last photo had “Seat 52” at one end and “Seat 53” at the other. What gives? Eidt explains: “If the whole family was going to a game, my father would hold all four tickets and be last in line at the turnstile, pushing us through. He’d fan the tickets out so the usher would see that there were four of them and then snap them back into a stack before handing them over. His hope was that the usher would nod and blindly rip, unaware that Dad had turned one ticket the opposite direction. So when he got home, he’d tape two pieces together and have a ‘complete’ ticket to put in his album (even though the top and the bottom had different seat locations). This trick had about an 80% success rate.”

• When Chris Warfford’s father attended the 1963 Gator Bowl, he didn’t just save this killer stub. He also archived the program and roster pull-out, plus a postcard and envelope from the hotel where he stayed. “A whole package of nostalgia!” Warfford says.

• Warfford also had this rather bizarre story regarding the 1998 Las Vegas Bowl, which was played in the midst of a sandstorm: “The ticket stub was one of those ‘collector versions,’ about the size of a sheet of paper folded in half and made from thick card stock. To combat the stinging sand, I tucked one end of the stub into my jacket collar and the other end under the side of my cap, so the side of my face that was facing the wind was protected. Then the coolest thing happened: Other people around me followed my lead, and by the end of the game it seemed like hundreds, maybe thousands, of fans were participating in this ticket stub phenomenon. OK, maybe it was just my family who joined in, but they certainly appreciated it. By the end of the game, the stub was quite weathered.”

Good stuff all around. But nobody will be able to save their tickets (or protect themselves from sandstorms) if there are no more tickets left to save, which appears to be the way things are headed. There’ll be no need printed tickets, or even PDF printouts, when you can just download a digital ticket to your Palm — or have a chip embedded in your palm.

We’re not quite at that point yet, but we’re getting there. Last year the Tampa Bay Bucs switched to a “ticketless” season ticket system, giving each of their season subscribers a pass card in lieu of printed tix. The team plans to stick with the card system for the coming season.

“Overall, the feedback was pretty positive,” Bucs PR director Jeff Kamis says. “I’m not going to say we didn’t get any calls from people who didn’t like it, but most people appreciated the flexibility and convenience.”

So is the physical ticket an endangered species? Russ Havens thinks so, but he isn’t too worried about it. “I think it’s a fair trade-off, considering the convenience factor, which serves the greater good,” he says. “Besides, that will make the stub-collecting hobby all the more interesting, because there won’t be any more new stubs — we’ll all be collecting and trading the old ones.”